This year in March, the students of third and fourth of ESO went to Cañete, Cuenca, for seven days.

The trip started on Saturday morning, at 8 a.m. It was a little bit early, but we were all really excited.

We went by coach. For Juan, the coach driver, it was the last year he would take the students of San Pedro School to Cañete. He has been our coach driver for twenty-five years and now he’s going to retire.

Tere, Rafa and Sergi were the teachers who accompanied us. It was different to be with them outside the school grounds, and we had the opportunity to get to know them better.

After six hours on the coach we stopped in Zaragoza to eat paella and after that we went to “El Monasterio de Piedra”.

El “Monasterio de Piedra” is a natural park with lots of incredible waterfalls and it offers a beautiful bird show. It was very nice, although it was so cold that it started hailing. Everyone tried to shelter themselves from de hail, but at the same time we had a great time.

At around six o’clock we returned to the coach and continued our trip to Cañete.

The last hours on the coach, before arriving at the hotel, were enjoyable because all the people were singing, laughing and chatting.

We arrived at the hotel “Hosteria Cañete” at 9 o’clock. Then we were given the bedroom keys and we had dinner.

That night, after having a bath, we danced at the hotel disco and at 12 o’clock we returned to the rooms. But the party wouldn’t stop until some hours later.

We were very tired because we hadn´t slept a lot but we really wanted to start off the day.

We went to “La Ciudad Encantada”, but the snow ruined our plans, and we couldn’t enjoy the excursion so much because it was dangerous. Instead, we did a snowball war. Everyone ended up wet and with snow all over their clothes.

In the afternoon Rafa showed us around Cañete, which is a small town with white houses and friendly people. We went to a bar to watch Barça playing a match, and the people who didn’t want to watch it were allowed to leave and spend time around town.

At night we went to gaze at the stars. The sky was beautiful, we were all in silence and all the lights were switched off. That moment was irreplaceable.

The day started at 9 o ‘clock. The coach was waiting for us to go to “El Nacimiento del río Cuervo”. This day was very cold. While we were walking towards the end of the path, it started snowing. We used the snow just to have some fun. Some of us were making a huge snowman, others were having a snowball war and still another group was playing with a Frisbee. But the rest were going to have lunch because the restaurant had a cozy fire-place.

When everyone arrived, part of the group went to cook lunch, which was a typical dish from there with meat and gruel, salad and fruit. The rest played cards or stayed in front of the fire-place.

That day, 21st March, was Emma’s birthday, so we played music and celebrated her birthday a little.

At five o’clock we got on the coach to return to the hotel, we arrived there at 7 o’clock.

We went to “The old quarter of Cuenca”. Our guide was very friendly but a little bit weird. He showed us around the city, the visit lasted two hours. We had some free time that we spent eating something and at the end we returned to Cañete.

After having a great paella, we headed for “El poblado Celta”. We had to walk a lot to arrive there but it was worth it. The views were incredible and we stood very high on the hill. There, as a nice gesture to Vero, one of teachers who couldn’t come on our trip, we held our hands and closed our eyes and just felt the wind while one of us made a video call to Vero. It was a magical moment. Later, after arriving at the hotel and having dinner, we had a shower and prepared to spend the night at the pub, dancing and playing football. That night it was Natasha’s birthday.

On that morning, we got on the bus and went to Albarracín. It is a medieval town and it doesn’t have much population. The guide showed us a house decorated as if it was ancient.

After the visit we had free time and almost everyone went to a bakery because it sold some amazing biscuits.

On the way back, the coach had to stop in the middle of the road to let three boys pee. A few minutes later the coach driver, as a joke, continued driving and left the three boys on the road. They started running after the coach until it stopped and let them return to the coach. All of us had a great laugh there.

That afternoon, we spent our time playing football at the school in Cañete and we made new friends. Their names were Rut, Cristian, Oscar, Luismi and Toledo. We won most of the matches and returned to the hotel at 8 p.m. That night, as every night, we stayed up until dawn and enjoyed chatting all together.

This was the only day we would spend in Cañete. Teachers had prepared for us a gymkhana around the town. It consisted in lots of different trials which were very funny. Each trial gave you points and, apart from the trials, the groups could do some extra silly stuff and record it to win more points.

That day, a lot of people got into the river, wore underwear on their clothes and walked in the streets, painted their faces or danced in the town. Everything was crazy.

Some recordings were hilarious. For example, there was a group that recorded a scene in a supermarket imitating the GhostBusters. And one of the trials, which gave us 500 points, was climbing up a pyramid that was a little bit far from the town and if you went along the wrong path there’s a river which some people had to cross, getting wet and dirty. The experience was very funny and everyone did some silly things.

That night, we went to the pub again. Most of us were tired and a bit sad: that was our last night. So we were all very calm and just enjoying a little bit of music and playing table football.

Waking up was difficult and sad, our trip had almost come to its end. That morning we left the hotel, returning the keys of all the bedrooms, although there was a girl who, accidentally, forgot to return it and she has brought the key to Gavà over with her.

In order to say goodbye to that beautiful town where Don Rafael, Rafa’s father, grew and lived and where he is buried, we went to visit Don Rafael’s tomb. It was a sad moment, even some boys and girls cried remembering Don Rafael.

After this, we left the town, saying goodbye to that incredible week which has made us better classmates and better friends. We will never forget this trip. All the experiences and anecdotes we’ve got from Cañete will always be part of our best memories. Our first thought when we arrived in Gavà was just repeating everything. 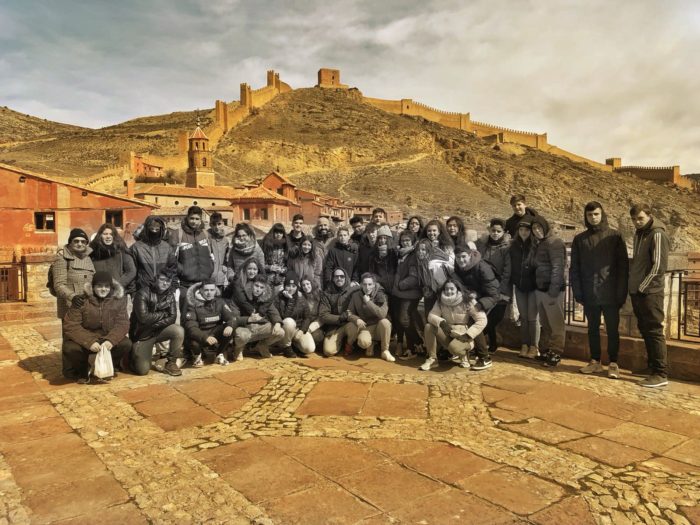